Holy cow, where has the summer gone to? Seems like Memorial Day was just a couple days ago.

And I’ve been riding a fair amount. Not as much as I would have liked–what else is new–but enough to keep me sane. Relatively sane.

Here are some images. I hope you enjoy them.

Elk! Hiding behind a pole. (You can still see her.)

Poison Spider Trail, Moab. (I crawled on my hands knees at a few points.) 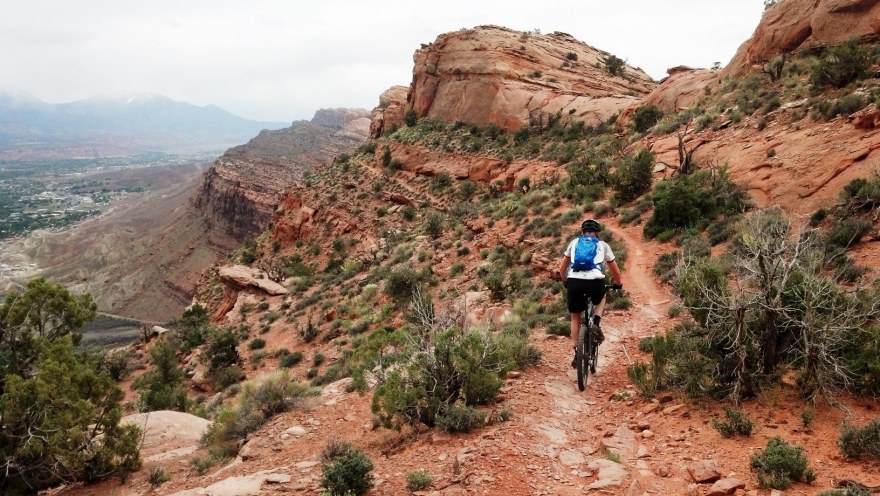 What do I want for Christmas?

A few weeks ago, while I was shouldering my mud-clogged mountain bike over a particularly muddy section of trail, a dude came rolling by on one of these. It seemed as if he were floating on air. Man, it would be fun to ride through the winter, through the snow and crud and mud, on one of these.

Just saying the word is fun: fatbike. Saying the phrase is fun, too: I’d like a fatbike. (Dig the rhyme?)

Time to start saving my pennies, maybe for next Christmas.

Speaking of winter, and the recent (non-happening) apocalypse, here’s a short, classic poem by Robert Frost.

Some say the world will end in fire,
Some say in ice.
From what I’ve tasted of desire
I hold with those who favor fire.
But if it had to perish twice,
I think I know enough of hate
To say that for destruction ice
Is also great
And would suffice.

Have a happy, safe, and wonderfully warm Christmas, everyone. Even if you’re out in the cold, on your fatbike.

Last week I got the results from a recent blood test and found out that I have a cholesterol problem, which came as a total, utter, shock.

A problem to the tune of 240 for an overall reading; 170 for the bad (LDL) cholesterol reading.

It’s not like I’ve been eating 2 pounds of bacon dipped in mayonnaise daily or anything. My first reaction: WTF? I’m a healthy eater! I workout! It’s not fair!

Second reaction: I got a little bit scared.

What if I’m in the midst of a long lung-busting, heart-thumping climb and I have a massive coronary and keel over right then and there? I thought. No one should die wearing shorts with a big fluffy pad between their legs.

And then: on Sunday, March 20, while riding the Hogback/Matthews-Winters trails, my riding buddy Ed and I came to a particularly gnarly section that runs downhill toward Red Rocks. I came to a switchback that I never try to ride–I scoot up to it, then stop and dismount, then walk down–as Ed cruised around the switchback and kept descending.

“You’re crazy, you’re amazing,” I said, because I sometimes see what he does and still I can’t really understand how he rides over the stuff he rides over. He’s really an incredible talent. Honestly.

But then, something impossible happened.

As I was walking my bike down the series of rock ledges, I heard a weird noise ahead. When I looked up, I saw Ed endo–his legs flying up and over, followed directly by his rear wheel. I could tell that he was going relatively fast (but not out of control) and he’d crashed.

In 12 years of riding with Ed, I’ve seen him crash once. Until Sunday.

He was alive–and conscious–when I got up to him, but he was grimacing and holding his left arm, which he said hurt a bit. He couldn’t move it, he said.

Three hours later, in an ortho emergency room (brand new, about two miles away from the trail head–a brilliant decision by St. Anthony’s Hospital to build it there) I watched as two docs first put him out with some wonder drug–though his eyes were still open and blinking occasionally–and then they grabbed his arm and roughly, powerfully, “reduced” his dislocated elbow. (Basically, one doc held his shoulder steady while the other yanked the hell out of Ed’s forearm by interlacing his fingers with Ed’s and levering it out, with his elbow against Ed’s biceps.)

The sound I heard during the process reminded me of the sound my collarbone made when I broke it skiing some 18 odd years ago. A gravelly, crunching sound, which was both cool and totally horrifying.

But then again, the stakes are high and I am suddenly more aware of that fact with everything I do (and eat, for cripessakes). I have kids, a wife, a mortgage. I’m getting older and am probably losing some strength, power, and flexibility. And I have freaking high cholesterol.

I am, as the saying goes, trying to embrace my mortality, though I really don’t want to. It’s not the sweetest of hugs, I have to say.

I’m popping my omega-3 pills and I’m wearing my helmet, that’s for sure.

Here’s a pic of Ed in the emergency room.

And here’s one of Ed a few days before, on a climb.

This, from the department of self-disclosing dumb things I have done.

For a while I had the habit of placing my bikes on top of the car in the Thule/Rocky Mounts/Yakima rack, and then forgetting that there was, in fact, a bike up there.

You can guess what happened next.

A few years ago, at a local bike shop, when I took my mountain bike in after the headset cracked on a downhill while riding, the guy asked me if I’d hucked the bike off a 10 foot drop or something.

“Hmmm,” he said. “Well, there’s really no other way this could happen. Except for one thing.”

“Smashed it against the top of your garage because you forgot it was up there on your car.”

He took one look at my guilty expression. “You garaged it, didn’t you.”

My riding buddy Ed says that it’s acceptable for every person to garage their bike. Once. After that, he says, you have a stupidity problem.

Over the years, I have garaged several bikes. Several times each. I’ve broken a frame, horribly dented and scratched the roof of the car, bent racks beyond repair, and ruined a seat. It’s gotten to the point where I hide the garage door opener in the glove compartment as soon as I strap the bike onto the rack. Or I stand the vacuum cleaner in the middle of the garage, so I can’t pull in. And then, hours later when I open the door, I’m like, who put the damn vacuum cleaner right in the middle of the garage?

Maybe I have a stupidity problem. (I see you, dear friends, nodding in agreement.) I blame the fact that I smoked pot all through my freshman year in high school. Killed lots and lots of brain cells, I did, walking the streets of my hometown, listening to The Doors, Van Halen, and Led Zeppelin on a gigantic boom box that my stoner friends and I took turns carrying.

Whatever the reason, I have often found myself in space cadet land, forgetting all about that very expensive apparatus on top of the car. Therefore, I must protect my self from myself.

Funny, how that goes.

PS. In below pic, you can see the tell-tale signs of garaging: several deep marks where the handlebars smashed into the siding.

Alas, the ride today ended early, in tragedy. My trusty, well-loved, well-ridden bike is broken. Snapped at the gusset between the frame and rear suspension triangle. I was riding at a place called White Ranch, just north of Golden, Colorado, rolling along on flat singletrack section hidden in shadows. It was cold, but I was feeling fine. Bumping over a slanted pitch of rocks–not too rough or steep–I spun my rear wheel and clipped out of my pedals. My chain was stuck and I couldn’t move. And then I looked down, and saw the break: 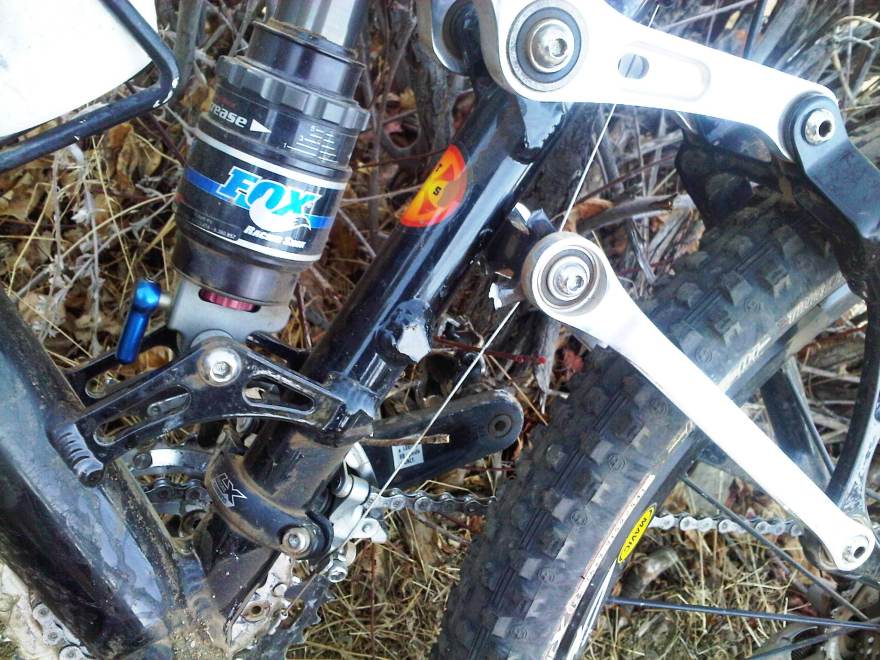 The lower silver bar should be attached to the seat tube, about three inches down.

I’d bought my ETSX a few years ago off Craigslist, for $900–a totally great deal. My first full-suspension, it helped me grow from a timid, sometimes clumsy rider to a much less timid, much less clumsy rider. I love (loved?) this bike. I love how it rides, how it handles, how I feel so well-balanced on it. I love how cheap it was. I love that it’s black, and a called a Rocky Mountain.

I can’t really afford a new bike, or even a frame. I’m not sure what I am going to do. (Boohoo. Why did I ever create”crash and/or break” as a blog category? I doomed myself.)

Nothing lasts forever. Change is the only constant. Stuff breaks. Breaking (up) is hard to do.

The cliches are all so very true, and yes, I will figure out a way to ride. I have an old single-speed sitting in the garage, which I can ride, though it’s terribly hard riding. And yes, part of me is excited about the possibility of getting a new ride.

Tragedies, large or small: you can’t let them stop you. You must keep going. You must find a way to finish the ride, and begin the next one. Things won’t ever be the same. But that’s not a reason to stop.

You must endure. Ah, that old lesson I keep learning over and over again.