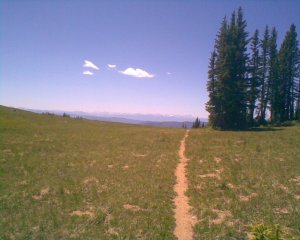 I’ve been watching a ton of TV coverage on this year’s Tour de France. I’m watching to see who’s going to win that day, will those wild breakaways succeed, who’s in yellow. I want to know what those crazy-long stages look like. I want to be an HD tourist, gently flying over the ruins of Roman castras, the gorgeous French countryside, the vineyards and quaint little towns, the majestic cloud formations above the Alps. And to see those nutty dudes who run alongside the riders—often in silly outfits, or, um, naked—as they chug up the mountains.

But mostly—like many others, probably—I’m watching to see what Lance does. To see if he still has it, it being that ability to ride himself away from all other men and suffer an immeasurable amount of pain.

I read somewhere that Lance is able to ride like that because he knows pain intimately, has survived a level of pain that few others have ever known. In a way, his body has adapted to it—the unspeakable and indescribable pain and exhaustion that goes with cancer and chemotherapy—and it is this pain that has taught him not to be afraid of death, of all things. Because the mind’s response to such an output—when someone pushes themselves past the brink of what the body thinks it can do—is to tell the body to stop what it’s doing. Lance can break past that threshold because at one point in his life, merely getting out of bed felt like such a task.

So mostly I watch for Lance, and then I think of these things. I think of both my mother and my sister, who both endured (that is the perfect word for it) chemotherapy and invasive surgeries. Both women amazed me with their stamina, their ability to keep going no matter what. Their determination has always astounded me.

I seem to be in love with the pain of pushing myself to this brink when I ride to the point of exhaustion and the edge of fearing for my life, but I know that my effort is nothing compared to what they have done. Their struggle is one of survival; mine isn’t. I can always slow down and get off the bike. When my sister wakes up and gets ready for another round of chemo or radiation, there is no stopping or getting off the bike. She has to go on.

And I find that remarkable.